We’ve all heard about it. We’ve all seen it play out, whether it was real or as a joke. However, there is still a lot of confusion and miseducation concerning epilepsy. For starters, about 3.4 million people nationwide have active epilepsy (meaning they have had seizure(s) within the past 3 months), however, that does not include those who have grown out of epilepsy or are not currently having seizures. If we equate these statistics to Cooper (a school of about 1300 children), about 8 would have epilepsy. Furthermore, about 1 in 26 people in the United States will develop some form of epilepsy in their lifetime. While these statistics may be higher than what one would assume, it’s important to mention that not all forms of seizures/epilepsy are what we see in the media.

Let’s start with the definition of epilepsy. According to the Epilepsy Foundation, “Epilepsy is a neurological condition that affects the nervous system. Epilepsy is also known as a seizure disorder. It is usually diagnosed after a person has had at least two seizures (or after one seizure with a high risk for more) that were not caused by some known medical condition” (About Epilepsy: The Basics). Now while the major symptom of epilepsy is seizures, many medical conditions can cause seizures without epilepsy. The Epilepsy Foundation notes that “seizures seen in epilepsy are caused by disturbances in the electrical activity of the brain. The seizures in epilepsy may be related to a brain injury, genetics, immune, brain structure, or metabolic cause, but most of the time the cause is unknown” (About Epilepsy: The Basics). There are also different types of seizures along with different types of epilepsy. For instance, the most common type of epilepsy is photosensitive epilepsy, or the type where flashing lights cause seizures. However, people with photosensitive epilepsy can have different seizure types. Here is a good graphic from yet again the Epilepsy Foundation on the breakdowns of seizures. Most of these medical terms require complex definitions, so click here to learn more. 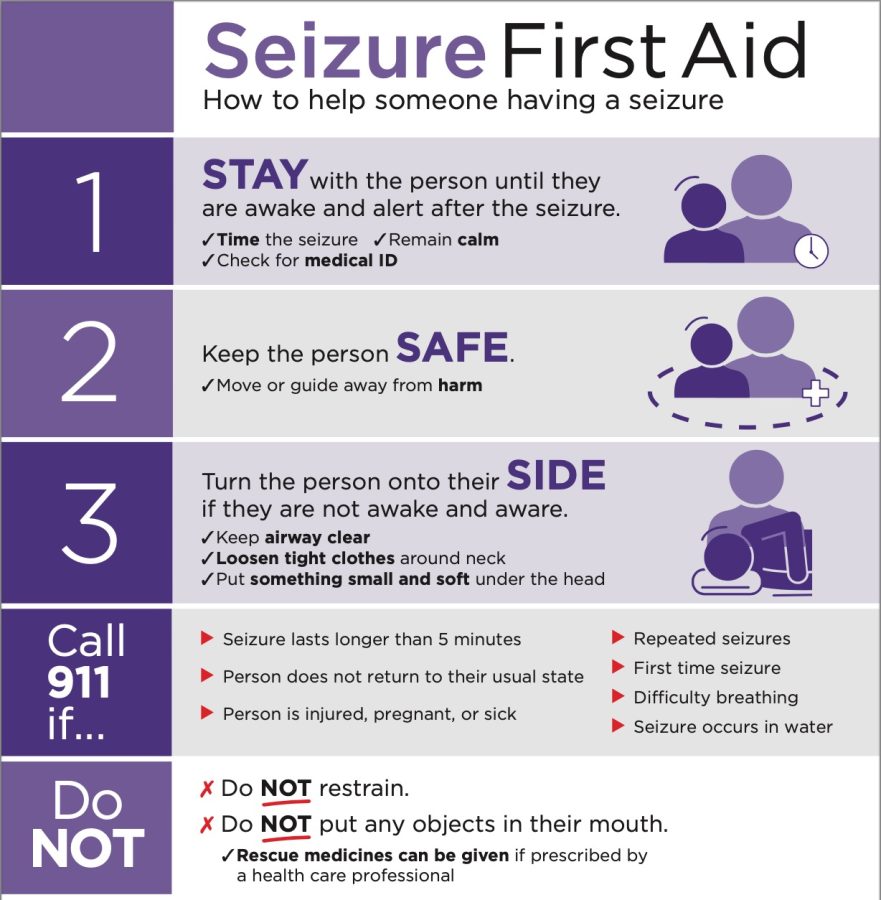 Along with simply reading these posters or watching the video linked above, you can also sign up to become seizure first aid certified using this link. It only takes a short webinar and quiz and soon you can save someone’s life. So, the next time you see something in the media surrounding epilepsy, think back to this information or even attempt to become seizure first aid certified yourself.